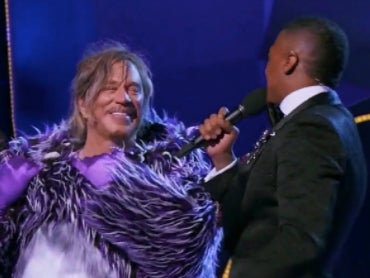 Season four of the reality contest is currently taking place in the US and, in a first for the series, the Hollywood star removed his own mask before being instructed to.

The Wrestler actor Rourke made it to week two before deciding he’d had enough wearing his Gremlin costume. He pulled the mask off after performing, which inadvertently caused him to exit the competition.

Host Nick Cannon struggled to contain his surprise at the unforeseen turn of events, stating: “We’ve lost control. This is a Masked Singer first– we didn’t get to vote, the other people didn’t get to come out.”

Following the reveal, Rourke cut all ties with the show by refusing to do any press.

After being asked why he appeared on the series on-air, Rourke said he “liked the show” and “was in the neighbourhood”.

He added: “I watched four episodes and they asked if I’d be interested so I watched from the very beginning and all that s***.”

An unmasked Rourke then performed a rendition of Ben E King’s “Stand By Me” alongside Cannon.

Teasing his appearance in the first episode, which aired in September, a masked Rourke had said: “Despite my checkered history, I can actually be quite charming. A true romantic. You may have heard I can be a bit combative. But I have a fluffy side too.

“I adore all animals, long spins on the beach, and bashing worthy opponents with foreign objects for maximum impact. I also love to cook. Maybe you like what you see. I’d love to have you for dinner. I mean, over for dinner. But first, snuggle up as I serenade you.”