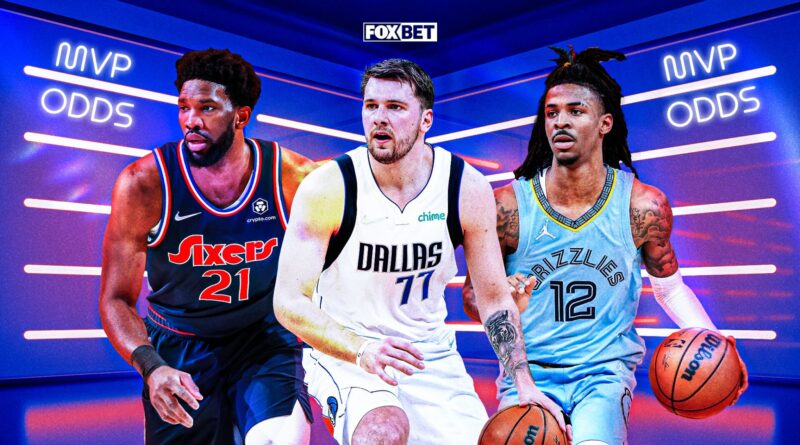 With the NBA season a mere two-and-a-half months away, futures bettors are getting an early sense for the major players in the 2022-2023 NBA Most Valuable Player race.

Will Ja Morant’s continued ascension into bona fide superstar status be rewarded with his first MVP trophy? Can Luka Dončić turn his deep playoff run into a springboard for even greater heights this season, now that Christian Wood has arrived? Or will last season’s runner-up, Joel Embiid, take home the trophy after two seasons of being disappointed.

Per FOX Sports Research, here are a couple of things you should keep in mind while looking at these numbers. Over the last 16 seasons, the preseason favorite has won six times with LeBron James accounting for four of those instances. Giannis Antetokounmpo (2020) and Russell Westbrook (2017) are the other two instances of the preseason favorite winning.

At +450, Luka Dončić is the preseason favorite to win MVP. Unfortunately, this is the third time he has been in this spot and the other two failed to yield him the coveted award.

However, last year he was named to his third straight All-NBA first team and led Dallas to the Western Conference Finals. While seeing the Mavericks again earn a four-seed in the West seems unlikely, especially considering they lost Jalen Brunson, simply having Dončić showcase his skills gives them a chance. And a season full of a healthy Luka running rampant is the sort of narrative MVP voters can get behind.

Joel Embiid (+500) is right behind Dončić as the second-best favorite in the league. Leading Philadelphia to the four-seed in the East amidst the Ben Simmons drama, while averaging 30.6 points (career-high), 11.7 rebounds (second-highest) and 4.2 assists (career-high) was nothing short of remarkable. Yet, it wasn’t enough to help him avoid losing out to Nikola Jokic for the second year in a row.

This season, Embiid will have a full training camp with James Harden, and look to build on the short introduction they had last season. Furthermore, the improvement of Tyrese Maxey, along with the addition of P.J. Tucker, will give Joel the supporting cast he needs to wreak havoc on the Eastern Conference this season.

Per FOX Sports Research, while 13 players have won back-to-back MVPs, only three have ever won it back-to-back-to-back. Nikola Jokić (+900) is looking to become the first since Larry Bird did so from 1984-86. The other two players that have won the award in three straight seasons are Bill Russell (1961-63) and Wilt Chamberlain (1966-68).

No one has won three MVPs in a row and failed to win the NBA championship at least once in those three years. So if you’re betting on Jokić to win his third, you might as well sprinkle something on the Nuggets title futures.

Ja Morant garnered a lot of attention on social media after talking about Michael Jordan while talking with Taylor Rooks of Bleacher Report. Ja first said he wished he played in MJ’s generation and would have liked to have played against him. Then, the Memphis Grizzlies’ star followed it up by saying quote, “I would have cooked him. I would have cooked him, too. Nobody got more confidence than 12.” Skip Bayless explains why he ‘despises’ Ja’s comments.

Per FOX Sports Research, the average opening odds of the previous 10 MVP winners (since 2013) is +880. So Ja Morant (+1100) is something of a long shot, but one that returns a great value. Morant not only had a meteoric rise in status levels last season — winning Most Improved Player — he also led the Memphis Grizzlies to the second seed in the tough Western Conference.

Since they are now the hunted rather than the hunters, a repeat performance would certainly thrust Morant into serious contention for MVP. The combination of voter narrative plus his cache as a high-flying fan-favorite could very well see these odds falling precipitously as the season progresses.

So there you have it. Who are you throwing a couple of bucks down on to win NBA MVP? Lock in on your favorite star and place your wagers now at FOX Bet!

Play FOX Super 6 every week for your chance to win thousands of dollars every week. Just download the Super 6 app and make your picks today!