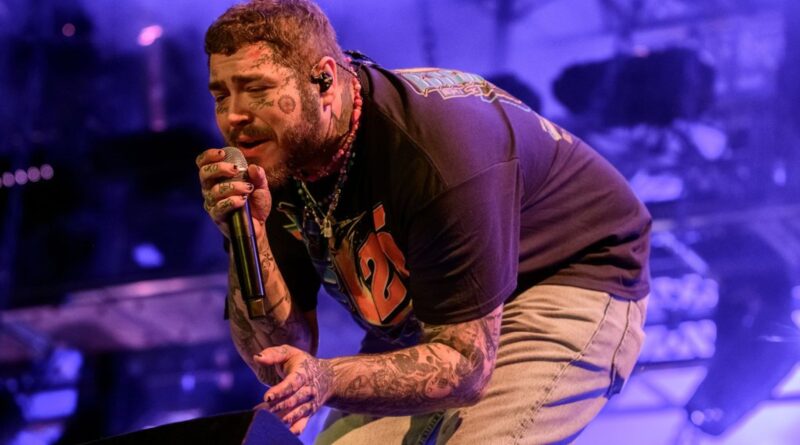 Will Post Malone deliver a U.K. No. 1 with Twelve Carat Toothache? Harry Styles could see to it that he doesn’t.

If it maintains its position when the chart proper is published late Friday (June 10), Twelve Carat would be Malone’s fourth consecutive U.K. Top 10 title.

Should Twelve Carat steam ahead to take the crown, it would give Malone a third consecutive leader after Beerbongs & Bentleys (from 2018) and Hollywood’s Bleeding (2019).

Meanwhile, Styles’ latest album lifts 2-1 on the Official U.K. Chart Update, as Liam Gallagher’s leader C’mon You Know tumbles 1-5. Should it complete its comeback, Harry’s House would be the first album to return to No. 1 in 2022.

The chart blast features no less than five new arrivals in the Top 10, with Michael Head and the Red Elastic Band’s Dear Scott set to start at No. 4; a re-issue of Prince & The Revolution’s Live bows at No. 6; You Me At Six’s Sinners Never Sleep is poised to enter at No. 7; and U.S. singer-songwriter Angel Olsen is on track for her first U.K. Top 10 appearance with Big Time, aiming for a No. 10 start.

Several acts enjoy lifts following their performances at last weekend’s Platinum Party at the Palace, in celebration of the Queen’s Platinum Jubilee. Queen’s evergreen Greatest Hits could improve 18-11, and George Ezra’s second LP Staying At Tamara’s could be this week’s biggest climber, lifting 34 places to No. 31.

Over on the singles chart blast, Styles remains on target for a tenth consecutive week at No. 1 with Harry’s House hit “As It Was,” while Kate Bush’s 1985 classic “Running Up That Hill” lifts to No. 2, for what could be a new chart peak.