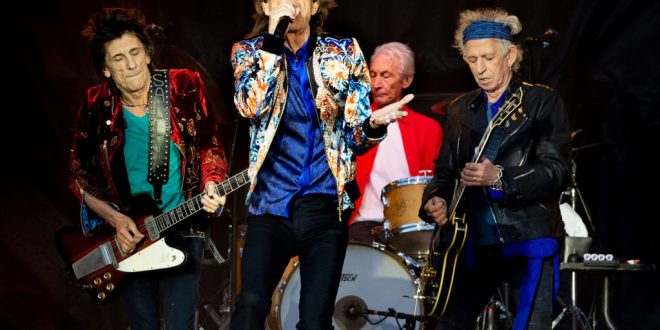 After a tight race, The Rolling Stones finished with another chart crown and a place in the history books.

The legendary British rock band bagged the title in the final hour with their reissue of Goats Head Soup (Polydor), the second time the album has ruled the Official U.K. Albums Chart. On this occasion, Goats Head Soup finished with an advantage of just 800 combined sales over the midweek leader, Declan McKenna’s Zeros.

With their latest chart feat, The Stones become the first band in history to land a No. 1 album across six different decades.

The Rolling Stones now have 13 No. 1 albums, including the 1973 original edition of Goats Head Soup, placing them level with Elvis Presley and Robbie Williams. Only The Beatles have more career No. 1 albums in the U.K., at 16.

Mick Jagger and Co. are enjoying a winning start to September. Last Wednesday (Sept. 9), the Hall of Famers opened the doors to their world-first flagship store, “RS No. 9 Carnaby,” on London’s Carnaby Street.

McKenna was pipped at the post on the Official U.K. Albums Chart, but he still enjoys a personal best with Zeros (Columbia), the most downloaded album of the week.

Zeros easily eclipses the No. 11 best of the 21-year-old English singer’s 2017 debut What Do You Think About The Car?.

Further down the chart, “Caribbean Queen” singer Billy Ocean scores an eighth Top 20 with One World (Sony Music CG), new at No. 14, while English synth-pop duo Hurts bow at No. 21 with Faith (Lento), their fifth studio LP.

U.S. hip-hop artist and singer Big Sean scores a third Top 40 title with Detroit 2 (Def Jam), new at No. 24, while controversial rapper 6ix9ine starts at at No. 27 with his second set Tattletales (Scum Gang).

Over on the Official U.K. Singles Chart, Cardi B and Megan Thee Stallion claim a second consecutive title with “WAP” (Atlantic).

According to the OCC, the hip-hop hit finishes the chart cycle with 62,000 chart sales, including 8.1 million streams, for a margin of 12,000 chart sales over the second placed single 24kGoldn’s “Mood” (Black Butter) featuring Iann Dior, up two places; while Headie One’s “Ain’t It Different” (Relentless) featuring AJ Tracey and Brit Award winner Stormzy is up 5-3, a new high.

English DJ and producer Paul Woolford impacts the Top 10 for the first time with “Looking For Me” (Looking For Me), his collaboration with Diplo featuring Kareen Lomax. It’s up 12-8.

Finally, Miley Cyrus cracks the Top 10 for the fifth time in her career as “Midnight Sky” (RCA) vaults 17-10. It’s her first stint in the top tier since “Wrecking Ball” hit the summit back in 2013.