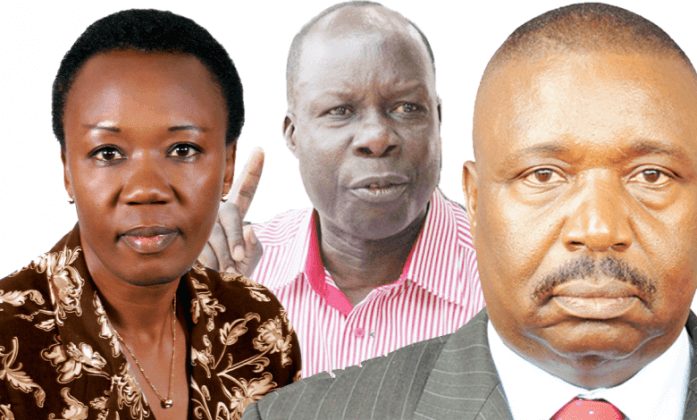 It follows a week of protests by angry voters in Rushenyi County in Rwahi, Rubaare and Rwentobo town councils in Ntungamo district protesting the declaration of the poll results placing the incumbent, Mwesigwa Rukutana in the lead with 20 votes.

The voters have been blocking Ntungamo-Kabale road for the past four days protesting the delayed declaration of the final poll results. Odoi says there is suspicion that one of the candidates is behind the demonstrations.

According to Odoi, as the NRM EC Chairperson, he has the mandate to investigate complaints raised by the candidates.

He says they are ready to visit Nyakahita village in Rushenyi County that has queries from both Mwesigwa Rukutana and his rival, Naome Kabasharari to ascertain their complaints before making the final declaration of the party candidate.

Odoi’s statement follows an announced by Naome Kabasharari, one of the candidates that she will wash her hands off the contested polls and let Rushenyi burn.

Meanwhile, the hotly contested Ntungamo NRM mayoral primaries were held under the tight watchh of Odoi on Sunday. The primaries were earlier on suspended after the candidates were accused of ferrying none residents to participate in the elections.

John Robert Omoding, the Associate Assessor, who doubles as the Head teacher for Aten PS said instead of rushing to re-open schools which could worsen the spread of the virus in the country, the government should prioritize on how to improve on the quality of education next year.

“We have been told to re-open but no measures have been put in place to ensure the safety of students and teachers,” asked Omoding.

Francis Ewalu, the LC-3 Chairperson Asamuk sub county in Amuria district says he is worried that if schools reopen soon, parents may not be able to return to schools since business earnings have been affected with COVID-19 lockdown.

Florence Angero, a parent and a resident of Akisim cell in Soroti City says re-opening of schools will financially strain parents and school owners who have been out of business for close to six months.