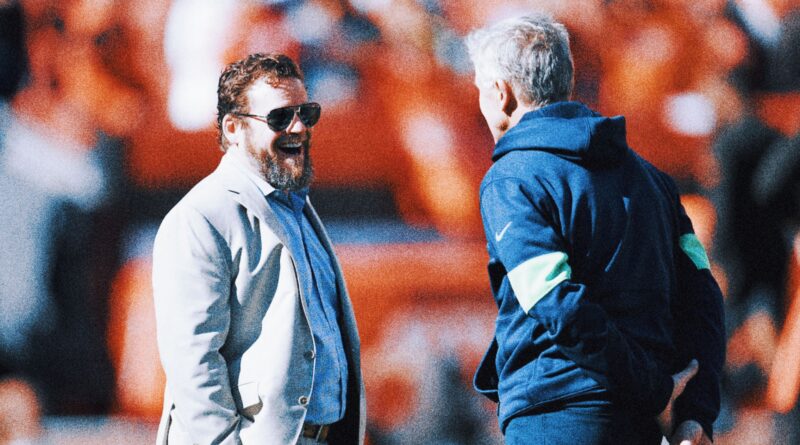 Many folks around the league openly mocked the Seattle Seahawks when they traded Russell Wilson to the Denver Broncos last March, figuring they would be one of the worst teams in the league to start the regular season.

“We got the s— kicked out of us all summer really,” Seahawks general manager John Schneider said in an exclusive interview with FOX Sports.

After the trade, Seattle coach Pete Carroll, Schneider and the rest of the team’s football staff went to work. And the result has been one of the surprise stories this year, with the Seahawks leading the NFC West at 6-4 heading into their bye week.

For Carroll, Schneider and the Seahawks, the success story can be traced to a return to the team’s core principles when the two took over in 2010: acquire fast, young, hungry athletes and let them compete.

“We are playing young guys again,” Schneider told FOX Sports. “And that’s the essence of the culture — the competition. This year, I would say also with the quarterback competition, you start there. You’ve got two guys [Geno Smith and Drew Lock] competing for the No. 1 spot on your team, that kind of matriculates through the entire roster.”

While Smith has shined in his first shot as a full-time starter since 2014, the centerpiece of this year’s team has been a talented 2022 draft class. Schneider said the rookies have been successful because of diligent work by the college scouting staff to identify high-character players who fit team needs, along with buy-in from the coaching staff, which helped evaluate and develop them.

What’s been the key to Geno Smith, Seahawks success?

FOX Sports Football Analyst Brock Huard joins Colin Cowherd to discuss the surprising success of Geno Smith and the Seahawks. Huard explains that Pete Carroll is back in his “happy place” and has cultivated a great youth movement.

“They’re confident,” Schneider said about this year’s rookies. “They’re great workers, and they act like they are pros, all of them. I think Tyler Lockett said it best: None of them really talk. They just listen, work their asses off and keep working at their profession.”

The emphasis on young players has resulted in a faster team on both sides of the football. According to Next Gen Stats, Seattle has three of the fastest-timed players running with the football this season in Walker, Rashaad Penny and Woolen.

“What’s really showing up is our team speed, especially when you watch our defense and special teams units — and that’s young guys flying around,” Schneider said. “We were a little bit safe the last couple years, you know, ‘Russell Wilson will carry you and Bobby Wagner will carry you.’ But it’s the ultimate team sport, and that’s what I think you saw in the year we won it in 2013.

“We were fast as s—, and we had some key veterans who were great leaders in Mike Robinson, Red Bryant and Kam Chancellor. So there were guys that could lead, we ran the s— out of the ball and played fast on defense, the quarterback managed the game and was running around making plays.”

In 2013, the Seahawks won the Super Bowl with the youngest roster in the game’s history. And while Seattle held onto several key players from that team to chase another ring, at some point the Seahawks had to move on from an aging roster and build anew.

That process came to a head this past offseason, when the Seahawks released All-Pro linebacker Wagner in a salary cap-cutting move and traded Wilson and a fourth-round selection to the Broncos for two first-round picks, two second-round picks, a fifth-round selection and quarterback Lock, tight end Noah Fant and defensive lineman Shelby Harris.

The Wilson trade set the table for one of Seattle’s best drafts since 2012.

“We ran into cap casualty guys every year — like Brandon Mebane, Red Bryant, Chris Clemens — guys you would like to keep but can’t keep because you’re trying to move forward,” Schneider said. “And then when you’re preaching competition as a general philosophy of your program, it’s hard when you have the highest-paid left corner, free safety, strong safety, middle linebacker, SAM linebacker, tight end, quarterback and Marshawn [Lynch]. We were paying a lot of guys there for a while.”

Schneider also points to back-to-back drafts in 2020 and 2021 setting the organization back, along with giving up two first-round picks and a third-rounder in a trade with the New York Jets for Jamal Adams just before the start of training camp in 2020. That trade paid dividends in the first season, when Adams totaled 9.5 sacks, but it has not been as fruitful with the LSU product missing time the past two seasons due to injuries.

“You combine that with two of the s–tiest draft classes in recent history in the league,” Schneider said. “And then also us not really doing a great job of bringing some guys in that were competitive enough to say, ‘I’m going to take Earl Thomas’ job.’ Or, ‘I’m going to go take Sherm’s [Richard Sherman’s] job.’ We got into a couple classes there where we learned those guys were Russell Wilson on Madden, or they were playing Kam Chancellor on Madden. And now they’re in a room with him and it’s like, ‘Oh s—, that’s Kam Chancellor.’ Instead of saying, ‘I’m going to go try and take his job.’

“So, learning from our mistakes and understanding it’s more about the makeup and character of the person or the man, the grit and the self-confidence that they have. Just really trying to focus on that.”

Along with this year’s rookie class, Seattle also struck gold with the team’s decision at quarterback, trading Wilson and ultimately inserting Smith.

“That was a huge event to have gone through,” Schneider said about moving Wilson. “Having gone through it in Green Bay with Brett [Favre], that helped a lot in terms of the confidence. Obviously, we didn’t have Aaron Rodgers sitting in the garage ready to go. But that was a huge phase. Having to deal with Bobby’s release as a salary cap casualty was a big deal. I just felt like the whole organization did a great job.”

Are Pete Carroll and Seahawks winning out of spite?

Pete Carroll has said his trust and communication with his quarterback are much better than before. Nick Wright believes Carroll and the Seahawks feel bitterness toward Russell Wilson because he demanded a trade after the organization catered to his play.

Schneider and the Seahawks also could lean on their experience in moving on from popular franchise quarterback Matt Hasselbeck, letting him sign with the Tennessee Titans in free agency and bringing in Jackson to lead the team in 2011.

Once Wilson was gone, Smith emerged as the starter in a two-man competition with Lock and has been one of the most productive quarterbacks in the NFL. Smith’s ascension gives Seattle’s some flexibility heading into next year’s draft, when NFL observers initially assumed the Seahawks would be selecting the team’s next franchise quarterback.

“Geno just took it to another level from a confidence standpoint, which was really cool because I always tell people one of Pete’s best attributes is his ability to instill confidence in people,” Schneider said. “But like all the good ones, you’ve got to be able to run it. [Smith has] nice feet, he moves well and throws a nice ball.”

After moving on from several franchise players, the Seahawks have returned to a roster-building philosophy, but they also have an eye on the present.

“We’ve always been doing things at the trade deadline to get better, but not like this guy is going to help us win a championship, or he’s going to tilt the odds of us winning a championship,” Schneider said. “There’s more teams going for it and saying f— it for the future.”

Heading into the season, it was all about the future for the Seahawks. But that future has arrived faster than anyone expected.

Get more from Seattle Seahawks Follow your favorites to get information about games, news and more