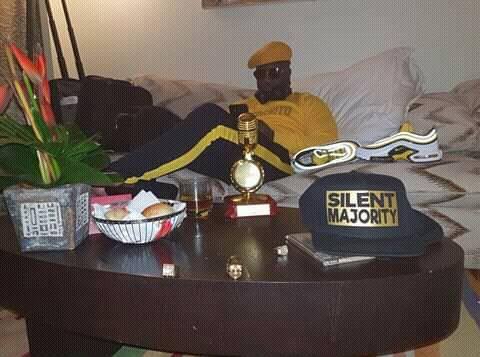 After being announced the winner of “Best Male Artist In East Africa” in AFFRIMA awards concluded last night, Bebe Cool has come out to educate his fans and haters about “hate”. Bebe could not help but rather brag about how hardworking he is.

Read His Statement Below.

Silent but effective (the Silent Majority). There is a very thin line between hate and fear. Hate describes a feeling of intense dislike for something/someone AND fear is an unpleasant emotion caused by a threat of danger, pain or harm. The process of achieving success is usually understood only by the successful and is always misunderstood by the unsuccessful. Most people misinterpret this process as arrogance, disrespect and/or pride. This process is comprised of hard work, honesty, belief and loyalty, which virtues must be cherished by those who want success.

Tonight is exemporary but at the same time we should not forget that wherever there is good, bad also exists and wherever there is bad, good always prevails. I would like to thank all my fans in GAGAMEL phamily, Uganda, Africa and the whole world for loving and believing in Bebe Cool and for taking your time to vote for me. Special thanks to these GAGAMEL members Kabaka Izz, Twine Crescent, Umar Kigozi, Amos Kewell and all those that have had a direct hand in making this happen. I am humbled.

On a sad note, my heart and prayers are with the families of those who have lost their beloved ones in the unfortunate accident on L.Victoria. We are with you in pain and sorry. May their souls rest in erternal peace. I dedicate this award to the two sides bad and good, those who love me and those who hate me, the Silent Majority and the loud minority, the believers and non believers.

In GAGAMEL, failure is not an option. If you know you know- but then again, I AM BEBE COOL.
#TONDEKA_EKIWATULE_MUTIMA_ZABU 26th December 2018.