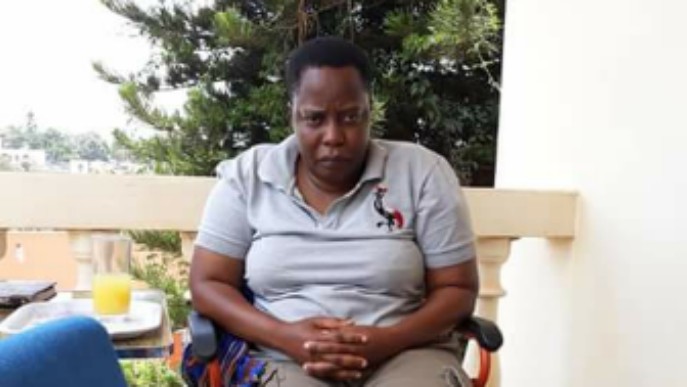 Agonised Mukono MP Betty Bakireke Nambooze has come out to name her political party: Democratic Party(DP) as the trophy winners of indifference.

“The trophy for indifference against me however goes to my political party DP and it’s dear leaders plus their new found pal Dr.Bwaniika” she says

According to the bedridden MP, her party has failed to raise questions about the cause of her current health status.

She further adds that the same party has taken advantage of her absence in her constituency and gone to her people telling them how bad she is!

Nambooze’s political heir was also installed by DP according to her.

“In addition the party official social media platform are used by some members to torment me as a comedian,politician who has fallen from grace now surving on feigning sickness, But why should this suprise me,isnt DP not a victim of political torture by Museveni itself?” She says

Nambooze however reveals how a certain European gained interest in her issue and is trying to persue the case! This is all after she was apparently denied the opportunity to make a personal statement about her condition in Parliament.

She goes ahead to blame all MPs including her friends who failed to raise her issue before parliament so as to investigate what happened to her!

She is believed to have said all this as a backup plan of her interveiw with BBC. Word has it that the interview had the MP bitter about her country that she couldn’t say anything good about it. She therefore released this information to create grounds for the upcoming interview.

This comes after several people condemned Kyadondo East MP Robert Kyagulanyi aka Bobi Wine for talking ill about his country in a press conference he held in USA covered by all top media like BBC News, CNN and Aljazeera among others.

Some believe that this is a sign of immaturity where instead of solving their own problems by themselves, politicians invite external powers. Others simply call this, lack of patriotism.