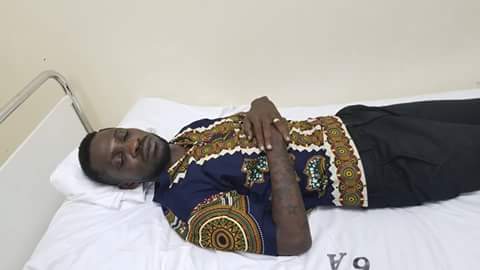 Following yesterday’s uncident where Kyadondo East MP, Robert Kyagulanyi aka Bobi Wine was picked by police off a KLM Airlines’ plane aboard to Washington, Barbie has narrated about what happened to Bobi wine.

The legislator’s wife says he told him he was beaten afresh as soon as he was put into the ambulance.

Here is what Barbie Has To say.

Bobi has been violently arrested by Security forces at Entebbe airport as he was heading to Washington, USA for treatment even when he has clearance from court to travel. He has a medical report from Lubaga hospital recommending urgent medical treatment abroad. He told me that as soon as they closed the ambulance doors, he was again brutally beaten in front of a government doctor. They switched off the lights in the ambulance and started battering him! Bobi is now back in pain and he is dumped at Kirudu hospital. He has missed his flight and time is running out. There is something we’re not getting. By denying him access to medical treatment, do they need him disabled for life? We also strongly object to their doctors forcefully trying to administer treatment or draw samples from him. The same people who have acquiesced in torturing him cannot be trusted with his body.

While at the airport, prior to his arrest no media personnel was allowed to capture anything. Bobi Wine and Mityana MP Francis Zaake were then driven to Kiruddu Hospital and put under tight security.