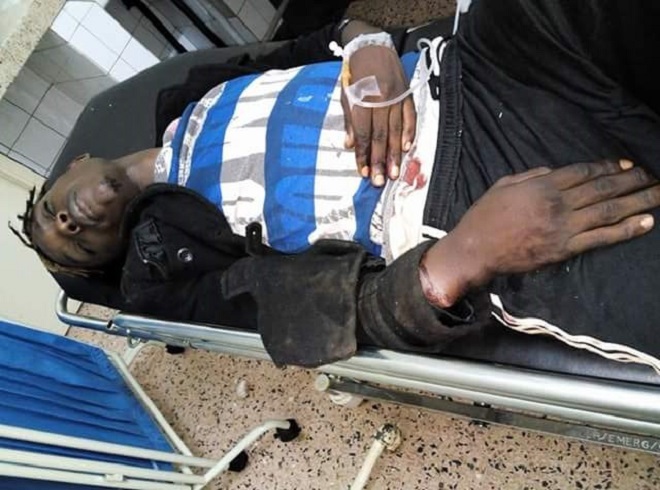 Following a terrible accident that got “Endigito” hit-maker Fyno fractured on the thigh and hand, our snoops followed up the story to get the details of the incident.

According to a one Mosh Mavoko who was with Fyno at the time of the incident, they(Capital music boys) left Eno Beats studio in the wee hours after a recording session together with Fyno. They got to the main road to get boda-bodas along Salama road to head home one by one.

As soon as Fyno had jumped onto the cycle, a car that was seemingly out of control came from behind, hit them and continued to an electricity pole that got it rolling.

“We ran to Fyno thinking he was dead but his slight body movements gave us hope” Said the worried Mavoko. He adds that he quickly jumped onto a boda holding Fyno and moved around several clinics around Makindye where they were rejected. Among these was Malcolm where there were told, there were no admission beds.

“It was a friend Henry Mwanje who brought a car that we used to take Fyno to Rubaga” He narrates.

He was rushed to Lubaga Hospital X-ray where they found the two fractures on on the hand and the other on the thigh.

The driver of the car got no injury and was taken to police by a one “DJ Brian Nze nkuba” and was arrested. His wife appeared at police and is currently negotiating with Fyno’s side to see how they can go about the matter.