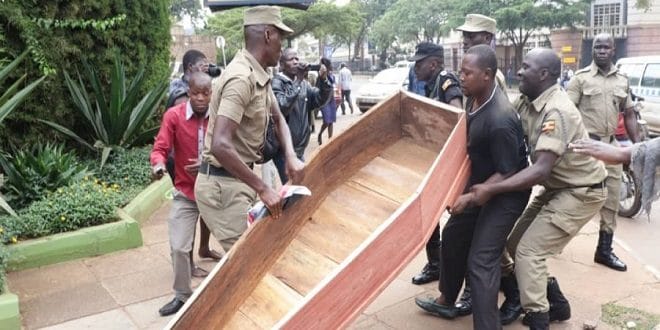 Youths Arrested For Dropping Coffins At Parliament In Protest Of Rampant Kidnaps!

A group of youth have stormed the parliament  with a coffin  condemning  the manner with which the house  is handling the numerous  cases of murder and kidnap  of women and children that have been reported  across the country  in the recent months .

The group led by Ferdinand Luta  have carried a coffins  to the parliament  accusing  MPs of ignoring  the issues  affecting  the ordinary Ugandans .

Police has however swung in to action and arrested Luta and another protester identified as  Betty Achomu. The pair claims that over 30 women and children have  been kidnapped  for ransoms  while others  have been murdered in the past 3 months but MPs  have not given the matter the attention it deserves.

Despite the MPs’ recent interaction with inspector general of police, Martin Okoth Ochola where they questioned him how kidnap cases can be stopped and he promised to curb the vice, these youths could not hold on any more. Recently the President also came out and promised to have the kidnappers hunted down.