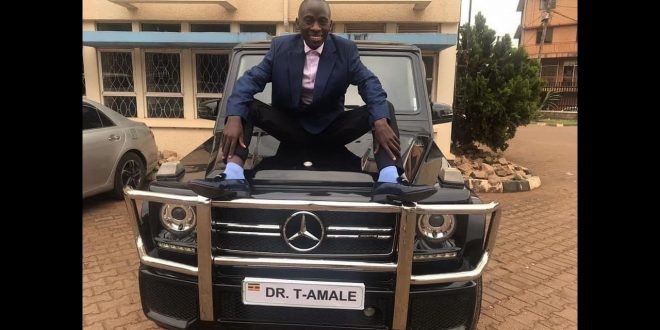 Faded comedian Kafeero Tobby aka Dr.T Amale is smiling end to end after the President of Uganda offered him a job at government owned station Bukedde FM.

This follows a cry by the comedian to the president recently in a meeting where he told him he was fired from Radio Simba because he was a staunch Museveni supporter.

One of the attendees of the same meeting Basajja Mivule told the press that T Amale asked the president for a job since he was jobless.

“The president handed T Amale over to his assistants to handle his issue and i think he has started working” Mivule said.

Among others that asked favours from the president is singer Kalifah Aganaga who asked for a scholarship that was allegedly given to him. The other was Arshburg Kato who cried out saying facebook had pulled down his social media accounts from which he used to earn a living.

Mivule however added that he never asked for anything because he found it unwise to ask for personal gains from the president.

This all happened in a meeting where National Resistance Movement(NRM) cadres from the media and entertainment sector who had participated in the NRM campaigns.

Also Read: Shocking Details On Why Radio Simba’s Kapalaga Left His Radio Job for The US!